Bed bugs seemed to disappear for decades, but they’ve made a big comeback in recent years. These pests are even finding ways to make it more difficult to eliminate them. Learn more about why Monmouth County pest control experts are dealing with more and more bed bug problems.

During the early to mid part of the 20th century, DDT was the main way to kill bed bugs. This chemical was banned during the 1970s due to safety concerns. Does this ban explain why bed bugs have come back? Banning DDT might have played a role, but it wasn’t the only factor.

Air travel is also cited as a possible reason for bed bugs returning and becoming more widespread. As more and more people flew around the world, these bugs were able to reach various locations.

Bed bugs have adapted to common pesticides that have been used to treat them ever since DDT was banned. This resistance helps explain in part why bed bugs have made such a strong comeback. Experts have had to turn to other means of eliminating these bugs in order to stop them from spreading.

If you’re having a hard time dealing with a bed bug problem, Allison Pest Control can help. With our Monmouth County pest control services, your home can be rid of these pests so you can sleep peacefully again.

What should you do if bed bugs manage to get inside your home? While there are certain steps you can take, make sure you also get help from professional Monmouth County pest control experts. Here are some other things you can do if bed bugs invade.

Make Sure You Have Bed Bugs

Other bugs can leave bites on you that resemble bed bug bites. Try to determine what type of bug has been biting you in case you’re not dealing with bed bugs.

Bed bugs are small and have a reddish-brown color. They’re more oval when they’ve fed recently and flatter if they haven’t fed. You might find these bugs in tiny cracks and crevices throughout your home.

Don’t try to handle bed bugs on your own. Have professional bed bug technicians take care of these pests.

Knowing what to expect from bed bug treatment can help you understand how it’s done and how you might need to prepare.

Vacuum and clean your home on a regular basis. This might help eliminate the occasional bed bugs that get in.

Bed bugs can lurk in almost any location, so it’s important to keep an eye out for them wherever you go. How can you make sure that bed bugs don’t come home with you when you’ve been out and about? The following tips can help you reduce your risk of having to get Monmouth County pest control services for a bed bug problem.

If you’re staying in a hotel or other type of accommodation when you travel, always check the mattress, box spring, headboard and other parts of the bed first. Look for tiny, reddish-brown bugs, which might be hidden in crevices and other hidden areas. Let management know right away if you spot bed bugs, and demand another room.

Keep Luggage Off the Floor

Don’t set luggage right on the floor, since bed bugs can easily get into it. Instead, use a luggage rack if you have one available. You can also put your luggage in the bathtub to keep it safe from bed bugs. Always keep luggage closed when you’re not using it, no matter where you store it. You should also keep clothing inside your luggage rather than in dresser drawers.

If you have bed bugs crawling around your home, contact Allison Pest Control. Our experts can provide reliable Monmouth County pest control services to get these bugs out of your home.

Deoxyribonucleic acid, otherwise known as DNA, contains the genetic makeup for all living things.  DNA contains codes that provide specific information at the cellular level.  DNA codes are analyzed for a variety of different reasons.  It is commonly used for testing genetics, diseases and for solving different types of crimes.  DNA is also used for anthropology, archeology and paleontology.

According to BBC Nature News reported on July 11, 2012, like all other creatures, both alive and dead, the DNA found in bed bugs is aiding in tracking down bed bug origins.

Toby Fountain, a biologist from the University of Sheffield in England, is gathering information in hopes of tracking down the origins of the bloodsuckers in the “great bed bug boom”, which was first documented just after the 2000 Summer Olympics in Sydney, Australia.

The practicality of knowing the specific DNA of bed bugs is that eventually the bed bugs DNA will be able to reveal exactly where it has come from.  If pest control professionals keep a record (sample) when they provide services, they will be able to know if the entire colony has been properly eradicated if more bed bugs surface at the same location.  Bed bugs that are picked up from a hotel will also have the potential of being specifically identified.

In addition to gathering specimens in London, which is considered to be a “bed bug hotspot”, Mr. Fountain is also collecting bed bugs from international destinations.  Kenya is a prime bed bug collection site as bed bugs have always been a pest that people live with in Kenya.  Finding a genetic link to any collected bed bugs in Kenya would explain the global bed bug resurgence of 2000.

Many people who happen to become infested with bed bugs tend to isolate themselves from family and friends as they are fearful that they may transmit the horrible creatures to other people’s homes.  It is not uncommon for those who are suffering through an infestation to have relationship problems and difficulty at work as well.  Many people feel shame and embarrassment when they discover that the tiny bloodsucking bugs have invaded their living space.

Here are some things to remember about bed bugs…

Bed bug infestations are commonly associated with a lack of sleep as people are often fearful of the nighttime attacks of the little vampires.  Stress from having to deal with the financial costs of eradicating the pests, living out of plastic bags, potentially losing belongings, dealing with the constant itching and irritation, and the constant cleaning associated with bed bug infestations can make a person feel like they are going nuts.  Some people even report the feeling of bed bugs crawling on their body long after the bugs are dead and gone!

Everyone should know that all of these feelings and reactions to a bed bug infestation are completely normal.  Despite what some people believe, bed bugs are not attracted to filth, nor do they transmit disease.  Bed bugs are hitchhikers which can be picked up anyplace that people frequent.  Even the cleanest home or the most expensive hotel may indeed have these bloodsucking pests lurking about and ready to hitch a ride to a new home.

Follow us on Facebook for more interesting information about bed bugs and other types of pests in New Jersey. 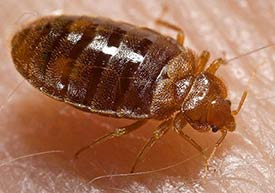 College students are now returning home in droves anxious to begin their summer vacation.  Some will travel to places near and far.  Some have new jobs awaiting their arrival back home.  In the excitement of their return home, it’s easy to forget that your college student may not be arriving home alone.  Many pest control professionals in Ocean County, NJ are reporting that panicked New Jersey parents are calling asking for help with a new unwanted houseguest that hitched a ride home with their inbound college student this month. Living in close quarters with a multitude of people is one way that bed bugs can be transported.  It is anticipated that approximately 50 percent of people suffer the allergic reaction that is associated with bed bug bites so it is easy to see how pesky bed bugs can hitch a ride back home from college.