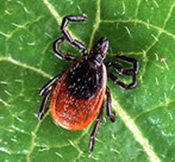 The black legged tick is a troublesome pest in many areas in the United States, especially the Northeast report pest control professionals in Monmouth County, NJ.  These freeloading bloodsuckers are responsible for spreading Lyme disease as they jump from host to host.  Black legged ticks, otherwise known as deer ticks, are opportunist feeders.  They lie in wait in wooded areas, in leaf litter, in grassy areas, and on leaves for the perfect moment to hitch a ride upon their next victim.  Despite being called the “deer tick”, the black legged tick is most commonly found nibbling away upon the white footed mouse.  It is at this stage that the tick becomes infected with dangerous bacterium which is then transferred to its next host, which is often a deer that is innocently passing by.  If the white footed mouse infected the black legged tick, then the tick would then infect subsequent hosts, including humans.

Ticks go through three life stages (larval, nymph and adult) in order to reach adulthood.  When they are born, the general rule of thought is that they don’t have any disease agents.  It is not until the tick attaches itself to their host that a potential disease can be contracted…typically during the nymph stage.

One fourth of all cases of Lyme disease in America are children who are age 5 to 14 years old.  They fall into a higher risk category presumably because they spend more time playing outdoors and the younger children are closer in proximity to ground level.  Seventy percent of Lyme disease cases occur when people are bitten by ticks that are in the nymph stage.

Ticks are small creatures, but they are dangerous to have lurking around your home.  It’s important to have regular perimeter pest control treatments performed by a licensed pest control professional in Monmouth County, NJ to avoid black legged tick bites on your family and pets.