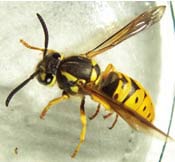 The yellow jacket wasp is known for its outdoor shenanigans.  They can become quite the outdoor nuisance pest in New Jersey, especially in August through October.  These pesky wasps spend their days bothering humans as they scavenge for food at cookouts, campsites, fairs, sporting events, outside restaurants and picnics too.  When not pestering humans during mealtime, you will often see them causing a ruckus at garbage cans as they are always on the hunt for a tasty treat.

A yellow jacket has alternating black and yellow exterior bands and is about a half inch long.  It’s easy to distinguish a yellow jacket from a honey bee because honey bees have dense hair on their bodies, but yellow jackets do not.

It is best to try to avoid the sting of a yellow jacket as they can be quite dangerous.  Unlike bees, wasps are able to use their barbed stinger to sting their victims repeatedly.  At full capacity, a good size yellow jacket nest could house 10,000 yellow jackets.  Yellow jacket nests can be found in trees, eaves, attics or wall voids.  They are especially known for their underground nests.  Many homeowners in New Jersey or other parts of the United States experience terrible yellow jacket attacks when they inadvertently run their lawn mover over an underground yellow jacket nest.  Doing so will often infuriate these wasps and provoke an immediate attack.  It should also be noted that wasp venom contains a chemical alarm pheromone.  Once this pheromone is released by stinging or squishing, it signals other wasps into attack mode; so particular care so should always be taken when dealing with wasps!  Yellow jacket stings are responsible for the most life-threatening stinging attacks in the United States and can be deadly to humans regardless if you are allergic or not.

Don’t let your home or business become overrun with yellow jackets this summer.  Let Allison Pest Control provide treatment so that you will not be stung!